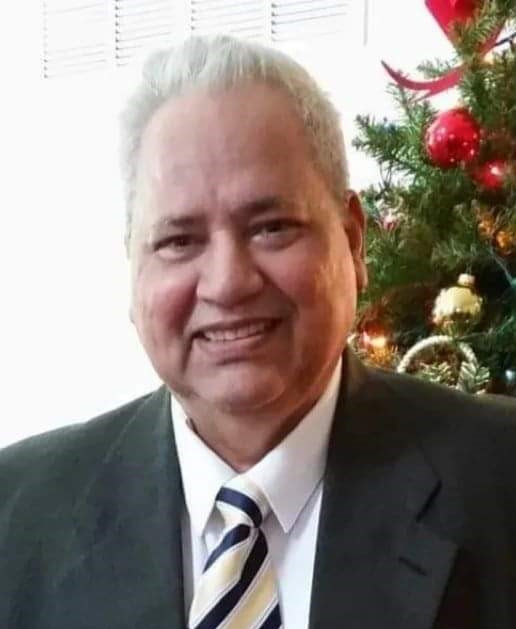 Please share a memory of David to include in a keepsake book for family and friends.
View Tribute Book
David Victor Jiwanmall June 14, 1949 – November 2, 2022 David Victor Jiwanmall went home to be with his Lord and Savior, Jesus Christ, on November 2, 2022. He was surrounded by his devoted and loving family. David Victor Jiwanmall was born and raised in Gujranawala, Punjab, Pakistan to Archibald Jiwanmall and Iris Jiwanmall (née Prem). He was the second child and eldest son of nine siblings. He attended the University of Punjab where he earned his Bachelor of Arts, Bachelor of Education, and Master of Arts in Political Science. He began his highly successful teaching career at the Government Christian High School in Daska, then moved to Saint John's High School in Rawalpindi, and was the Headmaster at Saint Mary's High School in Gujranawala. He was the Founder and Principal of Saint Stephen's English School in Gujranawala until 1994, when he immigrated to the United States and resided in Philadelphia with his family. In 1978, he married Tahira Jiwanmall (née Khan), and together they raised two sons and one daughter, in whom they instilled an unwavering faith in the Word of God and a profound devotion to our Lord Jesus Christ. He walked relentlessly with God and presented an example of strong faith & admirable characteristics for his family, friends, students, communities, and all those that became part of his precious worldly life. He was able to do this effortlessly, because he always sought guidance from the Word of God and practiced his actions per the Holy Spirit. Truly, David was a blessed child of his Savior, and his dedication and commitment to Him were constant and ubiquitously present in every facet of his life on this earth. This steadfast belief and love for his Lord are affirmations that he is with our Heavenly Father for eternity. He is survived by his wife of 44 years, Tahira, their three children (Leo, Eugean, and Lovitta), two daughters-in-law (Sarah and Ruhama), and three grandchildren (Joshua, Deborah, and Nehemiah). He is also survived by his three sisters and five brothers, their spouses, 25 nieces and nephews, and many more dear ones who loved and respected him immensely. His memories will be fondly cherished, and his loving teachings will always serve us tremendously. Funeral Service will be held at 10:00 AM on Saturday, November 12, 2022, Trinity International Christian Church, 855 Old Huntingdon Pike, Huntingdon Valley, PA 19006, where relatives and friends will be received from 9:00 AM - 10:00 AM. Interment will be in Lawnview Cemetery.

Share Your Memory of
David
Upload Your Memory View All Memories
Be the first to upload a memory!
Share A Memory