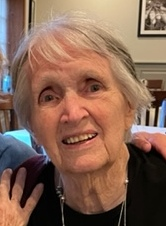 Get Directions
Friday
20
May

Please share a memory of Marjorie to include in a keepsake book for family and friends.
View Tribute Book
Marjorie (Peggy) Kent Haydock McConnell died peacefully on Sunday, May 15, 2022 at the age of 97. She was the wife of the late Howard Henry McConnell, Jr. and mother of Howard H. McConnell, lll of Philadelphia, PA Linda Kent McConnell of Ardmore, PA and Ann McConnell Smullen (Donald) of Oreland, PA. Grandmother of Daniel Henry Smullen (Jahnvi Patel) of Austin, TX and Timothy Kent Smullen (Jackie Carroll) of Philadelphia, PA. Rian Henry Smullen, son of Daniel and Jahnvi, is her great-grandson. Peggy was born October 10, 1924 at Abington Memorial Hospital. She was the daughter of Roger and Marjorie Kent Haydock of Wyncote, PA. Her two brothers, Roger Haydock, Jr. (Marilou deceased) and Wm Kent Haydock (Pinky) of Darien, CT., preceded her in death. Peggy grew up in Wyncote and attended Cheltenham High School (field hockey, tennis) graduating in 1942. Peggy's faith life got a strong start as her family were active members of All Hallows Episcopal Church, which was in walking distance of their home. Peggy's love of her childhood in Wyncote was chronicled in a published article "Along a Dirt Road". After high school, Peggy attended Sullins Junior College in Bristol, VA. After graduating from Sullins, Peggy attended Peirce Business School in Philadelphia. After Peirce, she worked for the American Friends Service Committee and as a legal secretary for White, Williams, Scott in Philadelphia. Peggy and Howard met through Peggy's brother Kent. Both Kent and Howard wrestled for the University of Pennsylvania and were Phi Gamma Delta fraternity brothers. Peggy and Howard were married on May 20, 1950 in Wyncote. After getting their start in Merion, PA they raised their children in Huntingdon Valley, PA, where the couple lived for 36 years. While there, they were faithful and active members of St. John's Episcopal Church, Huntingdon Valley. Peggy served on the Vestry and was active in an early morning Bible study and fellowship groups. Since 2001, Peggy and Howard had been members of St. Thomas' Church Whitemarsh where Peggy enjoyed the Thursday morning Bible study and Speeders' group. Peggy's interest in people led to her making many friends and connections throughout her life. She was fiercely loyal to family and friends and never heard a piece of gossip she was willing to share. "That's not your news to tell." Peggy's commitment was that of a mother and wife. She excelled at both! Peggy encouraged her children to study, but also to enjoy all aspects of growing up. Her volunteer endeavors included Children's Heart Hospital and Jenkintown Day Nursery Board. Peggy and Howard enjoyed their time as members of Huntingdon Valley Country Club. They took advantage of the opportunities to play golf, tennis, and paddle tennis. Their love of tennis continued well into their late 80's! Peggy was an integral part of her grandson's lives, from family gatherings, cheering at their sporting events and passing family history on to the next generation. As they downsized, Howard and Peggy moved to Perrin Court in Maple Glen, PA and Penn's Wood in Flourtown, PA before moving to Artman Lutheran Home in Ambler, PA in 2015. Peggy was a committed advocate for Howard as his years with Alzheimer's increased. Artman was a perfect spot for both Howard and Peggy to finish their lives surrounded by a most caring and compassionate staff. Peggy's funeral will be on Friday, May 20, 2022 (Peggy and Howard's 72nd wedding anniversary) at 11:00 am at St Thomas' Church Whitemarsh. Visitation for family and friends will precede the service beginning at 10:00 am. The address of the church is Bethlehem Pike and Camp Hill Road, Fort Washington, PA 19034. The burial will be private. In lieu of flowers, memorial contributions may be sent to Artman Benevolent Fund, 250 Bethlehem Pike, Ambler, PA 19002 or to St. Thomas' Church Whitemarsh, 7020 Camp Hill Road, Fort Washington, PA 19034

Share Your Memory of
Marjorie
Upload Your Memory View All Memories
Be the first to upload a memory!
Share A Memory