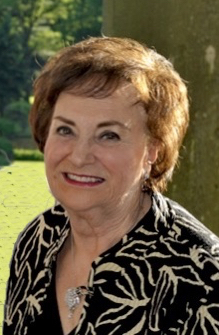 Initial services are private for the immediate family. The family is planning a celebration of Joan's life in the Fall.

Please share a memory of Joan to include in a keepsake book for family and friends.
View Tribute Book
Joan Miller Shorday was a beautiful, funny and generous woman who was the heart of her family. Joan peacefully passed on May 15, 2021, surrounded by her family at her home in Abington, PA. The youngest child of Martha and Fredrick Miller, Joan was born in Philadelphia, PA in 1932, and graduated from Frankford High School. Her family owned a summer cottage in Warminster, PA, where, at a Warminster Fire Department teenage dance, she met the young Charles E. Shorday in 1946. Joan and Charles shared a wonderful and devoted life together, recently celebrating their 70th wedding anniversary. Married in 1951, Joan had only recently started an exciting career at Leeds and Northrop Co. when Charles was drafted for the Korean War and she was called to run their Unity-Frankford store in Warminster, known as "the little store". Supported by family, friends and neighbors, she learned to cut meat under the guidance of a local butcher, order produce and groceries, and run the store on her own as her husband served our country. When Charles returned from the war, Joan continued to run "the little store" for five years, giving Charles the opportunity to open the family's first supermarket. In 1958, with two small children and a third on the way, she became a stay-at-home mother, devoted not only to her three children, but also lovingly raising Charles' younger brother, Russell, as one of her own. While she may not have been "on staff", throughout the years the family owned and operated numerous supermarkets, Joan was a star at training all new cashiers and customer service employees for many decades and a truly supportive partner behind the scenes. Joan was always the first to say, "The Lord's been very good to me" and shared those blessings readily with others. Never forgetting the generosity and support she received as a young woman, she was a life-long active volunteer and philanthropist. She was a Den Mother for Cub Scouts, a Girl Scout Troop Leader, an active member of the PTO in each of the children's schools, and the "car-pool mom". She was a member of Abington Presbyterian Church, where she raised her children and served as a Church Elder, Sunday school teacher and enthusiastic volunteer for various needs the church had. Joan generously supported Abington Memorial Hospital, Jenkintown Day Nursery School, the Abington Free Library, YMCA, Police Athletic League, the Abington Police Department, and the Sisters of Holy Redeemer, in addition to many, many animal causes. An avid pianist, she volunteered for decades in several Senior Centers, sharing her talent to entertain residents in weekly sing-alongs, whether at home in Abington or in her winter homes in California or Florida. As a mother, she was always willing to lend a hand, an ear, or share sage advice. As a grandmother, she shared her love of music, swimming, holiday baking, wisdom and kindness. As a wife, she was devoted and supportive above all else. As a sister and Aunt, her extended family was always included in summer adventures and welcomed in her home. Joan and Charles famously indulged family and friends with many lavish parties and unforgettable travel adventures through the years. Joan never forgot a birthday or anniversary and a group of cards were found by her bedside, stamped and ready to mail for the coming month. Joan was a beloved neighbor and friend to all. Wherever she lived, she endeared herself to those she met, who were entertained not only by her never-ending desire to feed them, but by her delightful stories and humor. No matter your stature in the world, everyone was equal with Joan, and she was eager to know your story. Joan is survived by her loving husband, Charles Edward Shorday, Sr., their three children, Charles Shorday, Jr.(Melinda), Lynn Shorday-Appelbaum (Mitchell), Susanne Shorday (Richard DiMarco); five grandchildren, Ehren Shorday, Cathryn Shorday, Jenna Askin (Zach), Conor DiMarco, Harrison DiMarco, and one great-grandson, Adam Askin; step grandchildren, Nash DiMarco (Kara), Lindsey DiMarco-Hyde (Jake), Matthew Appelbaum, Laura Appelbaum; step great-grandchildren, Jake & Kayla Hyde, Gianna & Avery DiMarco, as well as her beloved dogs, Pierre and Parii; her sister-in-law, Dolores Miller (Harry Kirchhoff); her dear niece Karen Johnes (Roger) and nephew David VanArtsdalen (Martha) and many great and great-great nieces and nephews. Preceded into Heaven by her siblings, Fred Miller and Margie VanArtsdalen. Her family is blessed with years of stories that will remind them of her strength, determination, joyful approach to life and endless generosity. Initial services are private for the immediate family. The family is planning a celebration of Joan's life in the Fall. Memorial contributions may be sent to: SPCA of Montgomery County (1006 Edge Hill Road, Abington, PA 19001) or Holy Redeemer Hospice and Home Care (521 Moredon Road, Huntingdon Valley, PA 19006).

Share Your Memory of
Joan
Upload Your Memory View All Memories
Be the first to upload a memory!
Share A Memory