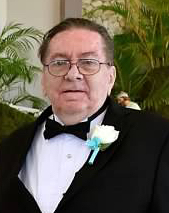 Please share a memory of Scott to include in a keepsake book for family and friends.
View Tribute Book
Scott Alan Benjamin, age 73, of East Norriton died on February 1, 2021. Born in Seattle, WA, he was the son of the late Vaughn Kay Benjamin and the late Francis Lou Grigsby Benjamin. Scott graduated from Crescenta Valley High School, in LaCrescenta, CA. In addition to serving with the United States Navy, Scott served as an electronics technician in the Navy for 25 years. He is survived by his loving children; Virginia Atkinson, Venesa Aguon (Dexter) and Scott Benjamin (Cheressa); by three grandchildren and three great-grandchildren. He was preceded in death by his son-in-law, James Goering. Services will be held privately. Memorial contributions may be sent to Wounded Warrior Project, P.O. Box 758516, Topeka, KS 66675 (www.wounderwarriorproject.org/donate)

Share Your Memory of
Scott
Upload Your Memory View All Memories
Be the first to upload a memory!
Share A Memory
Plant a Tree