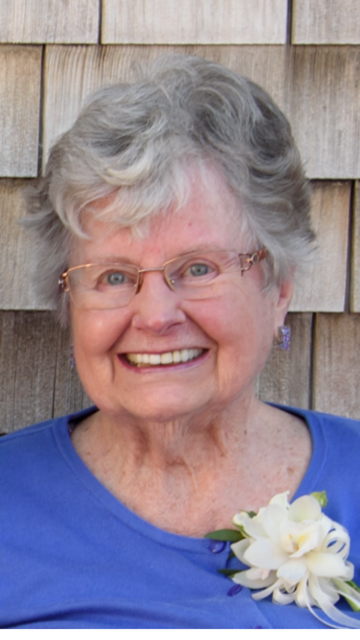 Please share a memory of Carolyn to include in a keepsake book for family and friends.
View Tribute Book
Carolyn Smyth Stewart, age 90, a resident of Foulkeways at Gwynedd died on June 12, 2020. She was the devoted wife of the late George S. Stewart, III for 37 years, until his death in 1987. Prior to moving to Foulkeways, Carolyn resided in Doylestown, PA, Jamison, PA and Jenkintown, PA. Born and raised in Indiana, PA, Carolyn was the daughter of the late Thomas Smyth and the late Martha McCormick Smyth. After graduating from high school in Indiana, PA, Carolyn studied art and earned her Bachelor's degree from Randolph Macon Women's College. She later studied Chinese brush painting with Phoebe Shih and the art of human form with Jacques Fabert. Carolyn and George married on June 17, 1950 and settled in Jenkintown, PA to raise their family. Carolyn was a devoted wife, mother, homemaker and grandmother. Her children described her as loving, kind and welcoming to all. She will be remembered for her beautiful smile and for her passion and knowledge of the arts, which she willingly shared with her children, grandchildren and many others. She enjoyed giving gifts and would put much thought and effort into finding the perfect gift for the recipient. She had a wonderful sense of humor, which at times could be mischievous. She was a member of Doylestown Presbyterian Church, where she sang with the choir. In earlier years, she was a very active member and Elder of Grace Presbyterian Church in Jenkintown, where she was a choir member, deacon and involved with youth programs. While raising her family she was very supportive of her children's activities and served as Brownie Scout leader and as a "Wrestling Mom". She served on the Board of Jenkintown Day Nursery for many years. She was a proud supporter of the arts and she was a supporting member of the Philadelphia Orchestra, Philadelphia Museum of Art and volunteered at the Philadelphia Chinese Christian Church and Center, where she shared her skills and talent with the youth. She was also a long-time member of the Questers, which is dedicated to preservation, restoration and education. She cherished the times she spent with her family on their ski trips, boating trips and especially at their beach house on Long Beach Island. She enjoyed extensive travels to China, Africa, South America, Europe and Alaska. She is survived by her loving children and their spouses; Sarah (Harry) Kahn, Alexander/Sandy (Nancy) Stewart, David (Frances) Stewart, Thomas (Trina Dykstra) Stewart and Susan Stewart; by her dear grandchildren Jonathan (Autumn) Sunderlin, Wendy (Brian) Sunderlin Myers, Peter (Liela Figleaf) Kahn, Gregory (Janelle) Kahn, Kelly Stewart, Madeline Stewart, Daniel Stewart, George Stewart, MaryJane Stewart, Dylan (Katie VenVertloh) Stewart, and Carolyn Stewart. Great-grandchildren, Hudson, Malia and Nolan. Additionally, she is survived by her sister Mary Catherine Osborne. She was predeceased by her brothers Thomas Smyth and Ellison A. Smyth. A memorial service will be planned for a later date. In lieu of flowers, memorial contributions may be sent to The Philadelphia Orchestra, One South Broad Street, 14th Floor, Philadelphia, PA 19107, (www.philorch.org) or Philadelphia Museum of Art Development Department, P.O. Box 7646, Philadelphia, PA 19101-7646 (www.giving@philamuseum.org.)

Share Your Memory of
Carolyn
Upload Your Memory View All Memories
Be the first to upload a memory!
Share A Memory
Plant a Tree