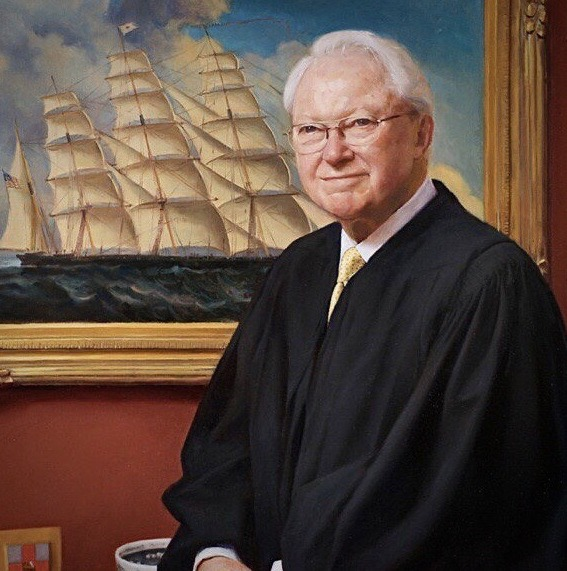 The Honorable Lowell A Reed, Jr.

Obituary of The Honorable Lowell A Reed, Jr.

Please share a memory of The Honorable Lowell A to include in a keepsake book for family and friends.
View Tribute Book
The Honorable Lowell A. Reed Jr., 89, a longtime resident of Abington, died April 11, 2020 at Rydal Park Medical Center. He was the beloved husband of Diane Benson Reed for 66 years. Judge Reed was born in West Chester, Pennsylvania. His parents eventually moved to Kenosha, Wisconsin where he attended a one-room school until eighth grade. He had fond memories of that school, which “never closed for weather.” He graduated from Mary D. Bradford High School in 1947. He earned a B.B.A. from the University of Wisconsin and also finished one year of law school at UW. Reed was drafted during the Korean War and became a Seaman Recruit in the U.S. Navy. He applied to Officers’ Candidate School and became an Ensign. In 1953, he was sent to Washington, D.C. to Naval Intelligence School. While there, he met his wife, Diane, on a blind date. They were married two months later and spent two years in the Philippine Islands on the Admiral’s staff, then returned to Washington, D.C. He was posted as a naval intelligence officer during the day, and was a law student at night. Eventually he left the U.S. Naval Reserve as a Lieutenant Commander. Judge Reed moved to Abington and graduated from Temple University Beasley School of Law in 1958 followed by a clerkship for the Honorable Ethan Allen Doty of the Common Pleas Court. He went on to be the Trial Counsel for Pennsylvania Manufacturers Association. He joined the law firm of Rawle & Henderson, founded in 1783, where he distinguished himself for almost 25 years and eventually became a senior partner. He excelled as a trial lawyer, concentrating in the fields of medical malpractice, toxic tort, occupational injury, products liability and complex litigation. In May 1988, after being sponsored by Senators Spector and Heinz, Reed was appointed to the United States District Court of the Eastern District of Pennsylvania by President Ronald Reagan. As a man who celebrated the call to be a civil servant, he embraced this position of high honor with dignity and humility. On the Court, he issued over one thousand opinions, presided over naturalization ceremonies granting citizenship to hundreds of people from all over the world, participating with vigor and verve whenever he was asked to serve. Judge Reed served many positions with distinction such as the Philadelphia Bar Association, President of the Philadelphia Association of Defense Counsel, Lecturer in Law at Temple University School of Law to name a few. He also received numerous awards and honors among which was the prestigious A. Sherman Christiansen Award given to him at the United States Supreme Court in Washington, D.C. as co-founder and first president of the first Inn of Court in Pennsylvania, the Temple American Inn of Court. It was for “those who had provided distinguished, exceptional leadership for the American Inn of Court movement.” He was the moving force behind many other Inns of Court. His work here enlarged his enthusiasm for mentoring law students and young lawyers in ethical civil behavior. Judge Reed’s twenty law clerks, secretaries, colleagues, and the many many people who knew him through the years attest to his commitment to the law, his civility, fairness, and kindness. He was an enthusiastic and compassionate mentor and friend. He remained on the bench until 2011, when he regretfully became inactive due to Parkinson’s disease. In the Abington community, Reed was a long-standing member of Abington Presbyterian Church where he was a trustee and elder. He was president of the Rydal-Meadowbrook Civic Association, trustee of the Abington Memorial Hospital Foundation, and served on the Abington School Board. Judge Reed loved sailing, skiing, traveling, history, ethics and the law, and family summers on Cushings Island, Maine. He was devoted to his wife of 66 years, their four children, spouses, 13 grandchildren and two great-grandchildren. Memorial contributions may be made to the Parkinson’s Foundation, 200 SE 1st Street, Suite 800, Miami, FL 33131, The Michael J. Fox Foundation for Parkinson’s Research, Donation Processing, P.O. Box 5014, Hagerstown, MD 21741-5014 or to Temple University Beasley School of Law, Attn: Colleen A. Uhniat, Esq., Executive Director of Development, 1719 N. Broad Street, Philadelphia, PA 19122.

The Honorable Lowell A Reed, Jr.

Share Your Memory of
The Honorable Lowell A
Upload Your Memory View All Memories
Be the first to upload a memory!
Share A Memory
Plant a Tree