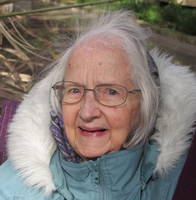 Audrey Shermer Haimbach, age 89, a resident of Manatawny Manor in Pottstown, PA and formerly of East Norriton, PA died on July 2, 2022. She was the devoted wife of the late Anthony Paul Haimbach. Born in the Germantown Section of Philadelphia, Audrey was the daughter of the late Frank Charles Shermer and the late Marion Doris Holz Shermer and sister of the late David Shermer. After graduation from Germantown High School in 1950, Audrey studied at Wilson College, from where she earned her Bachelor's Degree in Science in 1954. Soon after her college graduation, Audrey worked as a Chemist for Merck, Sharpe & Dohme. She held this position for two years until the time she and Anthony married. She then focused on her life as a wife, homemaker and mother. After Anthony's death, in 1982, Audrey went to work for ESCC at Paul V. Fly Elementary School in East Norriton, PA as a Daycare Worker, from where she retired in 2008 after 23 years of service. Audrey was a dedicated and active member of Olivet-Schwenkfelder United Church of Christ in East Norriton. During her 34-year membership, she helped and volunteered with their Holiday Bazaars, church dinners and with Communion. Additionally, she was a member and soloist for the choir and served on the Altar Guild. She enjoyed word puzzles, Sudoku,cross stich and many types of handicrafts. She is survived by her loving children and their spouses; Peggy Sue and Tom Majewski, George and Robin Haimbach, Marion and Brian Young, Andrew and Barbara Haimbach, eight grandchildren and two great-grandchildren. Memorial Service will be held at noon on Saturday, July 16, 2022, Olivet-Schwenkfelder United Church of Christ, 619 Township Line Road, East Norriton, PA, where friends will be received after the service. Masks are required in the church. Interment in West Laurel Hill Cemetery will be held privately. In lieu of flowers, memorial contributions may be sent Morris Arboretum, 100 E. Northwestern Avenue, Philadelphia, PA 19118.